Reading your monthly electric bill, you would know if you stopped using your air conditioner since the previous month, but you may not notice if you stopped watching television, because electronic appliances don’t use as much energy by themselves. Their energy use often goes unnoticed. But as it turns out, an estimated 10% to 15% of all electricity used in American homes can be attributed to the buzz of electronic devices, not because they use a lot of energy, but because of their sheer numbers. As electronics use continues to proliferate, and as new products with higher energy demands hit the market, the overall portion of the household energy budget devoted to electronics is expected to grow.

The vast majority of home electronics energy use — up to 90% by some estimates — is consumed by home entertainment systems and home office equipment. The remaining 10% consists of many small energy users, including portable devices with battery chargers. Although each of these products uses a relatively small amount of electricity on an individual basis, they continue to proliferate rapidly and represent an opportunity to keep overall electronics energy use in check.

To minimize the energy used by home electronics, it is helpful first to understand their operating modes and how power consumption varies by mode. This will make it easier to understand the opportunities for saving energy in the many different electronics products you most likely have in your home.

For starters, it is helpful to understand the true meaning of “on” and “off” as applied to electronics. It’s rarely that simple! Unlike a light switch that turns a lamp or fixture on or off, many electronics products operate in two, three, or even four modes, and even continue to draw power when apparently turned off. Commonly identified modes and their definitions are shown in the table below. Home electronics use power in standby and off modes to support features such as instant-on, remote control, channel memory, and LED clock displays. Common electronics components, like power supplies and battery chargers, contribute to standby and off-mode power consumption and also impact a product’s in-use energy consumption.

Active mode power consumption varies widely by product type, from less than 10 watts for some computer peripherals and stereo equipment to more than 200 watts for plasma screen TVs. Recent studies estimate that active mode power accounts for approximately 60% of electronics power consumption. Low power modes (including active standby, passive standby, and off mode) typically range from less than 1 watt to around 10 watts, although some products can use as much as 50 watts in one or more low power mode! The average U.S. household consumes 50 watts of standby and off-mode power constantly, amounting to about 440 kWh per year. Nationwide, this electricity costs consumers over $3.5 billion per year.

Electronics products run on low-voltage direct current (DC) and therefore require power supplies to transform the 120-volt alternating current (AC) supplied at the power outlet. Some larger products, like TVs, stereos, and set-top boxes, incorporate the power supply into the body of the product. Others use external power supplies, the familiar “wall packs” that increasingly compete for space in our outlets and power strips. These power supplies consume electricity whether the product is on or off — and even if the product is disconnected! The fact that these power supplies are drawing power can be demonstrated simply by grasping a wall pack that has been plugged in for a while: it will be warm to the touch. That warmth is simply electrical energy wasted as heat.

Did You Know? The 2.5 billion power supplies in use throughout the U.S. consume around 2% of the country’s electricity production and emit almost 50 million tons of carbon dioxide each year.

Considering that more than one-third of all American households have three or more TVs (and over half have one or two TVs), it is no surprise that home entertainment systems are a major household energy use. The table below lists the power consumption of common consumer electronics products across their operating modes, as well as annual electricity use. Use the table to estimate how much energy is consumed by these electronics in your home.

Until recently, most TVs used the same technology, and power consumption did not vary greatly from product to product. Rear projection models were the exception, using 3 to 4 times more energy than traditional CRT (picture tube) models. Times have changed as digital, flat-screen TVs have become the norm and as prices for new TVs with an increasing range of features continue to drop. When you set out to purchase a new TV, it is useful to know what, if any, energy penalty that slick new set comes with. New EnergyGuide labels on TVs can help. The labels display annual estimated energy use and operating cost compared to other models of similar size. Within the most popular size categories, TV energy use varies by as much as a factor of four, so taking the time to compare energy use before you buy can really pay off.

But don’t stop there. The rapid innovation that has transformed the TV market with new screen types and “smart” features is also yielding efficiency improvements. Look to the Enervee Score to identify the most efficient TVs available in the size you’re shopping for—their site will also direct you to retailers with the best prices. ENERGY STAR also list a wide range of efficient models in all size categories and a variety of screen types.

Ready to Buy? Check out the Enervee Marketplace

ACEEE’s partner, Enervee, makes it simple to find the best deals from your favorite retailers on the most energy efficient TVs and projectors that meet your needs.

The expanding universe of set-top boxes is a major factor in growing home entertainment energy use. The biggest users are cable and satellite boxes, particularly those that incorporate digital video recorders (DVRs). To put this energy use in perspective, consider that a typical household spends more on the electricity for their home entertainment system than on the electricity for a new refrigerator!  The good news is that concerted efforts to curb the growth in home entertainment energy use are paying off.  Under the terms of a Voluntary Agreement between pay-TV service providers, manufacturers, and energy efficiency advocates, 90% of all set-top boxes purchased by pay-TV companies from 2014 through 2016 met or exceeded ENERGY STAR Version 3.0 specifications.  As of 2017, stronger efficiency levels are required.  The agreement has reduced set-top box energy use by 10% to 45% and is saving consumers an estimated $1 billion per year.

More than 80% of U.S. households subscribe to some form of pay TV, so there is a good chance you have one (or more) of these boxes in your home. The majority of pay TV set-top boxes are installed and configured by the cable or satellite company, leaving you little choice in the model or energy use of the box(es) in use in your home. Another feature of the Voluntary Agreement is designed to help make this easier.  As of 2014, service providers began disclosing information on the energy use of their set-top boxes. Information on all the service providers’ products can be accessed from a single website: http://www.energy-efficiency.us/. When signing up with a new service provider or replacing your existing boxes, compare the energy use of models available from different service providers and select the most efficient box that meets your preferences.  If you have multiple boxes in your home, consider upgrading to a multi-room setup that couples the main box with low-power thin client boxes. As service providers begin to rely more on cloud-based content storage, eliminating the need for in-home hard-drive storage, expect to see further improvements in energy efficiency.

DVD and Blu-ray players, streaming video devices (like AppleTV), and video game consoles contribute a smaller fraction to total entertainment energy use. Increasingly, a single device can serve more than one of these functions. Each of the three major video game platforms—Wii, Xbox, and PlayStation—can also be used to play DVDs and stream online media content.

As more and more TVs are sold with wireless streaming capability built in and more multi-function set-tops are installed, the number of set-top boxes will decrease. But to reduce energy use while freeing up space in the entertainment center, remember to enable the sleep modes on your devices.

More and more people are working at home or using computers in their leisure time. As home office use increases, so does energy use by such equipment as computers, printers, copiers, and computer peripherals.

The table below summarizes typical power use by operating mode for office equipment and average annual electricity use. Note the big difference in energy use between laptop and desktop computers as well as the contribution of common computer peripherals, all things to keep in mind as you consider upgrading your equipment. 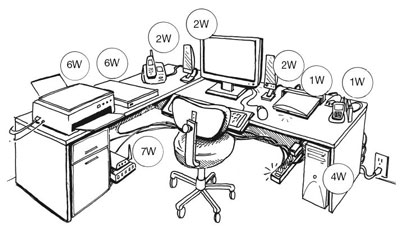 Small amounts of standby power can add up in the typical home office.

Look for the ENERGY STAR label on any new computer equipment you purchase. The ENERGY STAR label identifies efficient PCs, monitors, printers, faxes, and copiers. Current specifications set maximum annual energy consumption levels accounting for all operating modes as well as requirements for power management features. Remember, power management features for your computer and monitor must be enabled to save energy. Use the Enervee Score to identify the most efficient laptops, non-expandable desktop computers, and monitors.

Fortunately, any increase in household energy use when you work at home is usually made up for by reduced energy use for transportation. In fact, the trend toward more home offices could have a significant impact on energy use for commuting.

Ready to Buy? Check out the Enervee Marketplace

ACEEE’s partner, Enervee, makes it simple to find the best deals from your favorite retailers on the most energy efficient monitors that meet your needs.

Power supplies and battery chargers are a growing source of energy use in homes. Newer power supplies are slimmer, lighter, and more efficient.

Visit the ENERGY STAR site for a full list of qualified models:

Ready to shop for a TV?

Ready to shop for a projector?

Ready to shop for a monitor?